This study is the first bilateral analysis of Turkish Foreign Policy (TFP) in the research project titled: “An Anatomy of Turkish Foreign Policy.” Our goal is to quantify TFP’s evolution between 1995 and 2020 through a data-driven account free of speculative remarks. In this analysis, we will focus on the evolution of Turkey’s bilateral relations with Russia. In doing so, we will begin with a quantitative analysis of the relations to provide an overview. Next, we will survey the notable events between the two countries that impacted the bilateral relations.

Looking within the relations between Turkey and Russia exclusively, the summary statistics from Table 3.1 suggest the instances of cooperation between the two countries were slightly more than instances of conflict, given the negative skewness in the data’s distribution and the median of 1.9. The kurtosis of 2.57 suggests that most of the interactions were clustered around low-stakes interactions.

The frequencies of aggregate interactions over time provide more insights into the evolution of TFP towards Russia. Figure 3.3 below demonstrates the frequency of both cooperation and conflict initiations by Turkey towards Russia by year. This figure does not consider the magnitude of cooperation or conflict. The figure suggests that Turkey’s interactions with Russia have been characterized by acts of cooperation. While the interaction frequency ranges between 100 and 500 per year before 2014, the subsequent year marks a shift in the bilateral relations, with interaction frequency ranging between 750 and 2000 per year. Accordingly, Turkey’s relations with Russia entered a new phase in 2014. 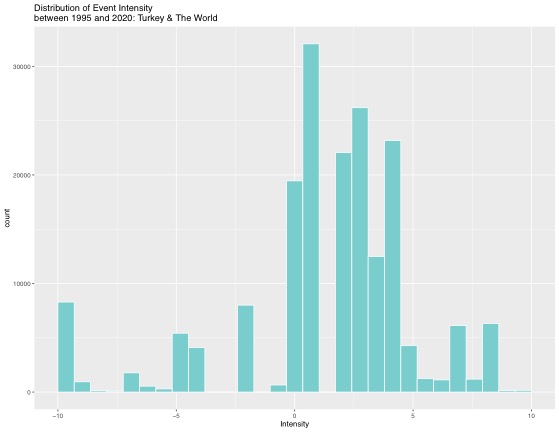 The annual disaggregation of the interactions is informative regarding the extent of variation in bilateral relations in a given year. Figure 3.4 demonstrates the annual distributions of interactions. While 0 marks neutral events, any interactions that are located to the right of 0 are classified as instances of cooperation, and to the left are instances of conflict. The magnitude of interaction intensity increases as it approaches the extreme values (10 and -10). The figure suggests a gradual shift to the right side of the 0 over the past two and a half decades. We find the greatest moment crisis in 2015, which corresponds to the SU-24 incident that we discuss below. Figure 3.5 demonstrates the variation in relations during a given cabinet. The intensity and frequency of interactions with Russia are at their highest during the 65th and the 66th cabinets. We also observe higher-than-usual interactions during the 59th and 60th cabinets.[3]

The red line in Figure 3.6 provides information regarding the short-term trends in bilateral relations. This trendline describes the short-term cascades in which the two countries engaged with each other. The blue line in the trend describes the long-term evolution of bilateral relations. The blue line suggests a rapprochement between Turkey and Russia. If we were to fit a straight line throughout the data within the timeframe under consideration, the slope of the line would be positive, suggesting a gradual growth in cooperative interactions between the two countries. 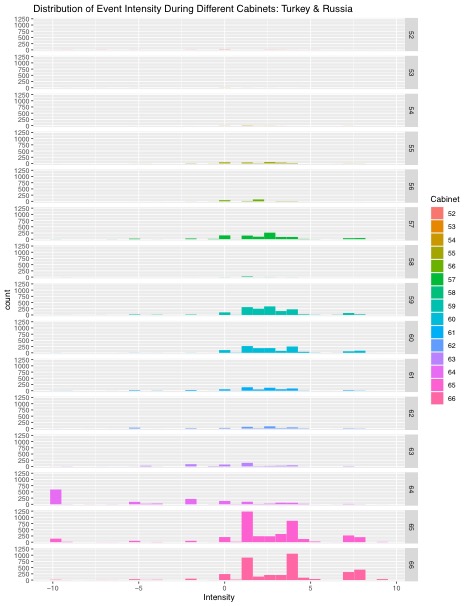 What are the momentous events that defined the relations between Turkey and Russia?

In this section, we focus on the milestones that defined the bilateral relations within the past two and a half decades between the two countries. We use the ICEWS intensity variable for filtering individual milestone interactions. Figure 4.1 summarizes the timeline of events for the countries.

Russia and Turkey signed an intergovernmental agreement for the construction of the Blue Stream pipeline that aims to transport gas from Stavropol Krai to Ankara over Durusu with an annual capacity of 16 billion cubic meters. The pipeline was constructed by the Blue Stream Pipeline B.V., which was established as a joint venture company of Russian Gazprom and Italian ENI. [Source]

The joint Action Plan for Cooperation in Eurasia was signed between the two countries at the level of Foreign Ministers in New York. The plan envisaged multidimensional cooperation in the Eurasian geography. [Source]

First Meeting of the Joint Action Plan for Cooperation, 9 April 2002

The first meeting of the high-level joint working group was established and held in Moscow under the Joint Action Plan for Cooperation in Eurasia, signed by the Ministers of Foreign Affairs of Turkey and the Russian Federation on 16 November 2001. During the meetings held at the level of Deputy Undersecretary, current regional and international issues were discussed, particularly relating to Eurasia. [Source]

Russian President Vladimir Putin made a two-day official visit to Turkey, the first by any Russian leader in thirty-two years. Vladimir Putin met with his counterpart Ahmet Necdet Sezer in Cankaya. He then met with Prime Minister Recep Tayyip Erdogan and Foreign Minister Abdullah Gul, where they discussed possible cooperation areas in defense, energy, and finance. The visit had been seen as a historic step for bilateral relations. [Source]

Prime Minister Recep Tayyip Erdogan made his first overseas visit in 2005 to Moscow. This trip followed the first official visit of Russian Federation President Vladimir Putin to Ankara since the end of the Cold War. A wide group of businesspeople joined the Turkish Prime Minister’s entourage during his Moscow visit. [Source]

Prime Minister Recep Tayyip Erdogan and Russian President Vladimir Putin met in Sochi in a closed meeting. After the meeting, Turkish Prime Minister said, “We lay the groundwork for common interests.” Russian President announced that Turkey and Russia commonly aimed to increase their trade volume by around twenty-five billion USD. This meeting was the fourth meeting between the sides in the last seven months.[Source]

Turkey held the 15th Summit of the Black Sea Economic Cooperation (BSEC) in Istanbul. The theme of the conference was presented as “exploration of new horizons”. During the conference, Turkey’s President Ahmet Necdet Sezer, Prime Minister Recep Tayyip Erdogan, and Foreign Minister Abdullah Gul engaged in several bilateral talks with the leaders of neighboring countries. Turkish Prime Minister and President held their meetings with the Russian Prime Minister separately. [Source]

Prime Minister Recep Tayyip Erdogan came to Moscow to hold talks on the South Ossetian conflict between Russia and Georgia. Russian President Dmitry Medvedev indicated that the trade volume between the two countries was at its highest. [Source]

Turkey and Russia initiated the High-Level Cooperation Council (HLCC/UDIK) in 2010 to institutionalize and strengthen cooperation between the two governments and societies of the two countries. The HLCC meetings, which are held alternately once a year, are co-chaired by the two countries’ leaders. [Source]

Turkey and Russia signed the Readmission Agreement as a legal instrument in the fight against illegal migration that aims to prevent human mobility. The agreement is expected to be protective after the acceptance of a visa-free travel regime regarding potential problems related to illegal migration. [Source]

Foreign Minister Ahmet Davutoglu said that Turkey does not intend to intervene militarily in Syria. [Source]

Beginning of the Russian invasion of Crimea. The invasion ended with the annexation of the territory by Russia on 18 March 2014. [Source]

Russian President Vladimir Putin announced that Russia decided to build an alternative pipeline route through Turkey after the suspension of the South Stream project. In line with this, Turkey’s BOTAS and Russian Gazprom signed a new Memorandum to construct an offshore natural gas pipeline, called Turkish Stream, across the Black Sea to the Turkey-Greece border. [Source]

Russian warplanes carry out their first air strikes against the opponents of the Syrian President Bashar al-Assad. [Source]

Turkey shot down a Russian warplane SU-24 fighter on the Syria border due to Turkish Air Space border disputes. Putin’s described the incident as a “stab in the back” committed by “accomplices of terrorists”. [Source]

Russia imposed sanctions related to joint economic projects, restricting financial transactions, and changing customs duties on Turkey over the downed SU-24 fighter jet. Some Turkish workers in Russia were arrested or rounded up due to visa violations. [Source]

PYD, defined as a terrorist organization by the Turkish Republic, opened a representative office in Moscow. The office defined itself as the Western Kurdistan Representative. [Source]

Russia declared that the Crimean Tatar Milli Mejlis was banned. In response to the unilateral decision of Russia, Turkey’s Ministry of Foreign Affairs condemned Russia’s invasion of Crimea. Turkey announced its full support to the Crimean Tatar community and their Assembly. [Source]

Turkey sent a letter to the Kremlin about the event of the downed Russian jet in 2016. Kremlin said, “Turkey apologized for shooting down the Russian jet.” [Source]

Turkish president made his first foreign visit after the coup attempt to Russia. The visit was noticed as the first meeting after Russia’s SU-24 jet shooting down due to a border dispute in December 2015. According to the TASS News Agency, Erdogan said, “I believe a new page in bilateral relations will be opened” before the meeting. [Source]

The Assassination of the Russian Ambassador Karlov, 19 December 2016

Andrey G. Karlov, who served as the Russian Ambassador to Turkey wasassassinated by an off-duty police officer in Ankara. The other officers neutralized the assailant. After the event, Russian President Vladimir Putin defined the attack as a sabotage attempt to deteriorate ties with Turkey. [Source]

Foreign Ministers of Turkey, Russia, and Iran met in Moscow to discuss solutions to the Syrian conflict. They decided to start ceasefire talks between the Syrian government and the opposition. The meetings had been seen as a gateway to the Astana process, which was held one day after the assassination of the Russian Ambassador to Turkey, Andrey G. Karlov. [Source]

Turkey, Russia, and Iran met at Astana regarding the Syria conflict. They decided to act together to strengthen the political process rather than military interventions to provide solutions in the region. [Source]

Turkish President Recep Tayyip Erdogan and his counterpart Vladimir Putin met in Sochi and discussed many issues spanning from the Syria conflict to bolstering trade relations. Both leaders reached a consensus on seeking a political solution for the Syrian civil war. After the meeting, Putin said that “The recovery process in Russian-Turkish ties is complete.” [Source]

TurkishPresident Recep Tayyip Erdogan announced Turkey sent the down payment to Moscow for the purchase of the Russian-made S-400 missile defense systems. [Source]

Turkish President Recep Tayyip Erdogan and his counterpart President Vladimir Putin met in Istanbul for the 23rd Energy Summit, where both countries’ energy ministers reached an agreement on implementing the Turkish Stream project. The Turkish Stream pipeline is expected to send 30 billion cubic meters of gas a year under the Black Sea to Turkey. [Source]

Officials from Turkey, Iran, and Russia met with the United Nations (UN) to form a constitutional committee for Syria in Geneva. Previously, the same countries discussed within the highest level for forming a political resolution for Syria as the guarantor countries for the Astana process. [Source]

The presidents of Turkey, Russia, and Iran met at the Tehran Summit to find a political resolution for Syria even though they disagreed on the ceasefire decision. The statement signed by the leaders declared further cooperation in the Syria conflict in line with the Astana format. [Source]

The Russian Air Force and Syrian Air Force conducted airstrikes against a Turkish army convoy in Balyun, Idlib Governorate. According to the Turkish Presidency, the airstrike resulted in thirty-four Turkish soldier casualties. [Source]

Turkish President Recep Tayyip Erdogan and Russian President Vladimir Putin reached an agreement to end the fighting in northwest Syria. They signed a protocol that led to a ceasefire that started on March 6th. The protocol sets up a six-kilometer security corridor in the north and south where the M4 motorway is located, acting as a bridge between Aleppo and Latakia. The agreement also enables joint patrols along the M4 motorway. [Source]

[2] Notable events are captured by multiple news agencies leading to repetitions in the dataset.